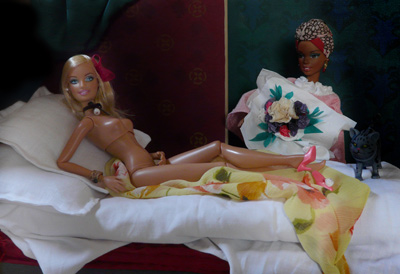 Inspired by The Titian, Olympia caused a scandal. Manet didn’t show it at the “Salon des refusés” but he did, two years later. It asserted him as the Avant-Garde movement great painter.

Among all the painters who showed women in the mythic posture of odalisques, Olympia by Manet is far the most soul stirring one for me. The model’s expression and posture look contemporary to me; she’s both proud and revengeful. Not an ounce of indolence or languor. Everything is under strain.

So, Barbie, naked in an alcove, wondering whether the person walking forward with flowers is worth her attention… It appeared to be a wonderful theme to develop; Barbie’s smile is so innocent! Moreover I discovered a personal talent as a tapestry maker to create the red silk mattress. 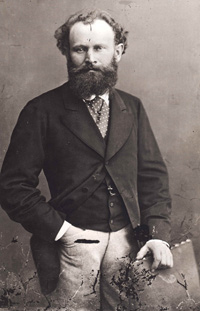