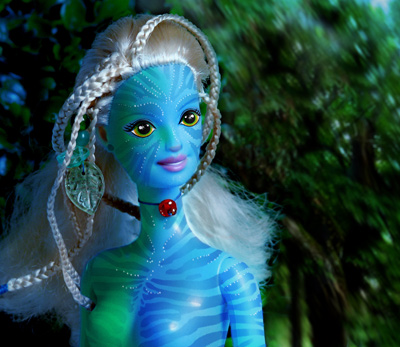 I was not interested in the story, but I was on the emergence of new canons of beauty.

In a way, Neyterti, the Na’vi’s heroin, is an idealized combination of physical performances, mixing up the bestiality of wildcats (their muzzles, their teeth, growls, body language..), of bats (their ears, auditory acuity) and the suppleness of dancers, everything giant-sized of course, an essential component in tales. Her figure and the patterns on her skin make me think of Masaï shepherds, with their jewels, hairstyle, and paintings decorating their bodies. It’s an idealized digest of the present standards of beauty in the world collective imagination.
She’s swift, proud, honest, a tiny bit feminist and deeply committed to her world and traditions.

In a way, Barbie is just the opposite; she’s a consumer, she’s self-centered; she has full to bursting wardrobes; she’s an empty-headed icon, a point reference for numbers of lithe girls all around the world.

So, apart from pointed ears, superimposing these two standards of beauty was really tempting.